Craig Federighi, Apple’s senior vice president of software engineering, says, “With [3D Touch] it was only at the moment where we finally got a design experience that’s like, ‘Yes! This is what we want!’ that we [asked] how hard it’s going to be to make.”

The answer was really hard!

“Engineering-wise, the hardware to build a display that does what [3D Touch] does is unbelievably hard,” says Phil Schiller, Apple’s senior vice president of worldwide marketing.

Apparently, 3D Touch technology is one of the hardest things Apple has ever engineered and the company spent years developing it.

But the grinding work behind a single iPhone feature paid off when Apple launched the 3D Touch technology with the latest Apple smartphones (iPhone 6S and iPhone 6S plus) last September.

So, what is Apple’s 3D Touch technology?

Apple calls the 3D Touch technology as the next generation of multi-touch. Whether or not, it is worth knowing about.

3D Touch is basically an input method which differentiates between a soft and a hard touch.

3D Touch works on pressure sensitivity. It senses how much pressure you apply to the iPhone’s display making it easier for users to get information at a glance at navigation between applications.

3D Touch works throughout iOS 9 to make the things you do every day more natural and intuitive. It works on the home screen giving you shortcuts for the tasks you execute frequently.

So, if you get a text message with a meeting time or even a location, you can peek at it to see if you have time in your calendar or view the location on the map.

Another example of 3D Touch – with a light press you can peek at an email in your inbox and open one by pressing a little deeper.

Also, when you softly press on the camera icon in your iPhone 6S or iPhone 6S Plus, a list of frequently used actions will pop up like recording or sending a picture to a contact. If you press harder on that option it will execute the option.

This video below from Apple explains 3D Touch in 4 minutes. Take a look:

Why should you care about 3D Touch?

Well, because you are someone who owns an iOS app or plans to launch one in near future.

3D Touch is iPhone’s biggest new feature and soon all popular apps will integrate this technology (in fact many apps have already done it, more on that later).

Apple has integrated 3D Touch into everything on the iPhone 6S and 6S Plus—the phone, the weather app, iTunes, messaging, and the Web.

Soon, it will become a habit for iPhone users to press the app and expect the content to pop out. If your app doesn’t provide that, you may miss out on a lot of prospective interactions with your users.

Apple has already issued a call to arms, encouraging developers to get their apps ready for 3D Touch. Apple’s 3D Touch developer site already has a number of resources to get started. Apple also got few guides for developers who want to get started as soon as possible.

How can 3D Touch be leveraged?

Apps have been using gestures like Tap, Swipe, and Pinch but now with 3D Touch apps will get more advanced features that take advantage of the new functionality. If you don’t add anything more than home screen shortcuts, then it won’t have a big impact. Benefiting from this new technology will require excellence in engineering and creativity to use 3D Touch.

There are 3 unique features of 3D Touch technology which you can leverage in your app:

3D Touch senses the pressure you apply to the screen.

Apple has integrated this feature in one of its default apps, Notes. So, while you’re drawing or jotting down a thought, you can press lightly for finer lines, or more deeply for thicker ones.

Apps can use this feature in multiple ways. For example, a drawing app can use pressure-sensitive drawing to produce thicker or thinner lines depending on how much pressure you apply to the screen. Similarly, a social networking app can let users press on a picture to quickly share it.

Gaming apps can use this feature and take the app to another level. For instance, the game AG Drive offers a pressure-sensitive accelerator button on the righthand side of the screen.

Look for events in your app which require pressure-sensing, and add useful options for the users.

Peek and pop are really convenient ways to move around on iOS, and this feature can be implemented in almost every app.

‘Peek’ means previewing the piece of content by pressing lightly on the screen and when you ‘pop’,  means when you press on the screen longer – the content will expand, letting you interact with it. 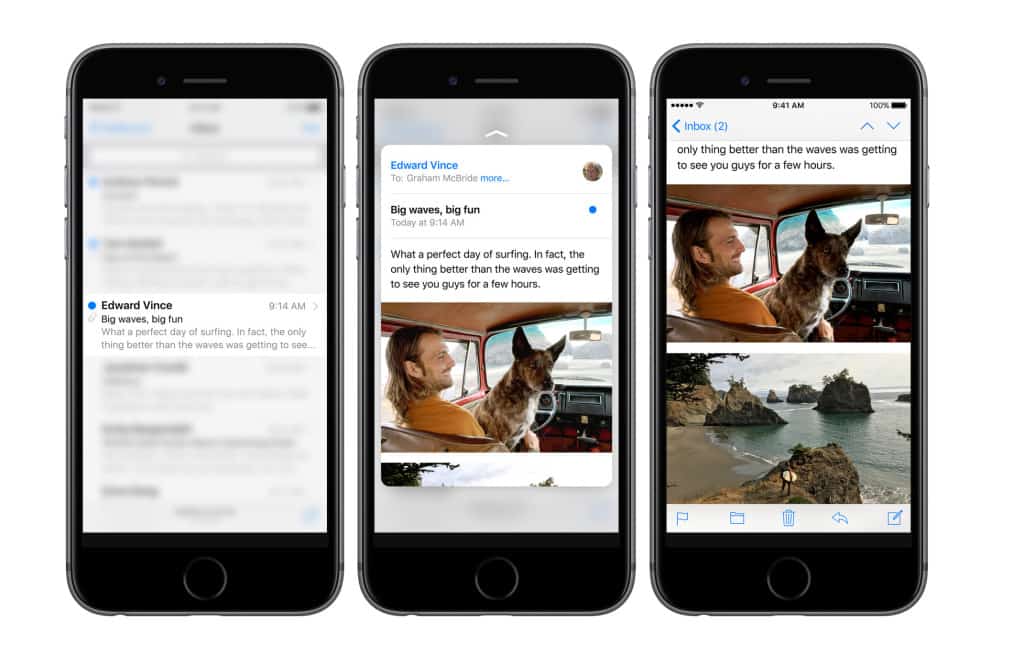 For example, a news app can let the user peek into the breaking news and the pop the content out if the user continues to press it. Similarly, a photo-sharing app can let users glance at photos and expand when they want.

As an app developer, you will have to bring up contextual menus based on the amount of pressure that’s applied to the screen.

If you don’t have the resources and time to build both or any of the above feature, add the ‘Quick Actions’ feature to your app. This is the bare minimum level of support you can provide and get listed in 3D Touch apps.

Quick Actions is nothing but a drop-down menu of the frequent actions (or home-screen shortcuts) of your app.

For instance, if you press harder on the icon for the Phone app a little mini-menu pops up, offering the chance to call one of your more frequently called contacts, or to create a new contact.

Quick Actions menu pop up when a user press hard on an app’s icon. It let users do the things they do most often, faster and in fewer steps.

But remember, a user has complete control whether they want to use your 3D Touch features or not. Users can disable 3D Touch and even control how sensitive it should be. So, don’t try to just fit in these features for the sake of it.

How some of the most popular apps use 3D Touch technology

It’s not just Apple’s native apps that will work with 3D Touch but some popular third-party apps have already updated to accommodate for the iPhone 6s and iPhone 6s Plus users.

Here are some of the apps for your inspiration, which are using 3D Touch in brilliant ways.

The tech giant Google spared no time in rolling out updates with 3D Touch technology. The Google app got an update with the 3D Touch feature. So, now when you hard press on the Google app icon on iPhone 6S and 6S Plus, you will see shortcuts for search, image search and voice search.

The updated version of Google Maps lets users deep press on the app icon, and instantly start the process of navigating to their home or work. This means users don’t have to open the app and manually set directions to their saved Work or Home destinations.

So, now forcibly touching the Skype icon brings up the search and calling options, leveraging the ‘Quick Actions’ feature. It also gives a shortcut to the dial pad, allowing you to open Skype straight on the dial pad screen to initiate a call.

Skype also used the ‘Peek and Pop’ feature. You can press on a recent conversation to peek into conversations or pop video chats into the foreground.

With almost 300 million monthly active users, this photo-sharing app was one of the first apps to jump on the 3D Touch bandwagon.

Apple even highlighted what Instagram can do during their presentation.

Instagram leveraged Peek and Pop, and now you can quickly look at pictures in your feed without fully jumping into that person’s profile. With the Quick Actions menu, you can take actions like New Post, View Activity, Search, and Direct.

Within the app you can press on a person’s name to see their account card and swipe up to get Unfollow, Turn on Post Notifications, and Send Message options.

After the 3D Touch update in the Pinterest app, you can launch straight into trending, search pins, and create a board with a press on the app icon.

Once inside a board, the ‘peek and pop’ feature lets you peek at items and pin, link, and send items.

This touch-enabled game for iPhone goes beyond quick actions and peek and pop. Players can control the speed and force with which the game’s animated dolphin protagonist gobbles up sharks by applying varying levels of pressure to the iPhone’s touchscreen.

Plenty of apps in creative space can take inspiration from this game.

This restaurant reservation app lets you peek at restaurant details by pressing lightly on a restaurant in search results and swipe up to instantly book by selecting a time.

If you press a little harder to jump to the restaurant’s profile. You can also press the app icon to jump to your Favorites or any Upcoming Reservations using quick actions.

If you already have an app you can roll out an updated version that supports the 3D Touch features or if you are planning to build one you can think through as in where all you can leverage 3D Touch.

In any case, if you need help developing your mobile app, you can reach out to us anytime – Arkenea is one of the top software development companies in the USA.