According to this report, 60,000 apps are added to the App Store every month. That means, on an average 2,000 apps go live each day.

A lot of these go through the pain of having their app rejected. Sometimes, it’s an oversight, but oftentimes, it’s to do with compliance or the lack of their guidelines.

Well, Apple is pretty thorough in evaluating new apps and it has listed the 10 most common issues to reject an app.

In fact, just these 10 reasons account for almost half – 48% – of rejections. Top of the list, at 14%, is the simple fact that the submitted app lacks an adequate amount of information, followed by buggy apps. 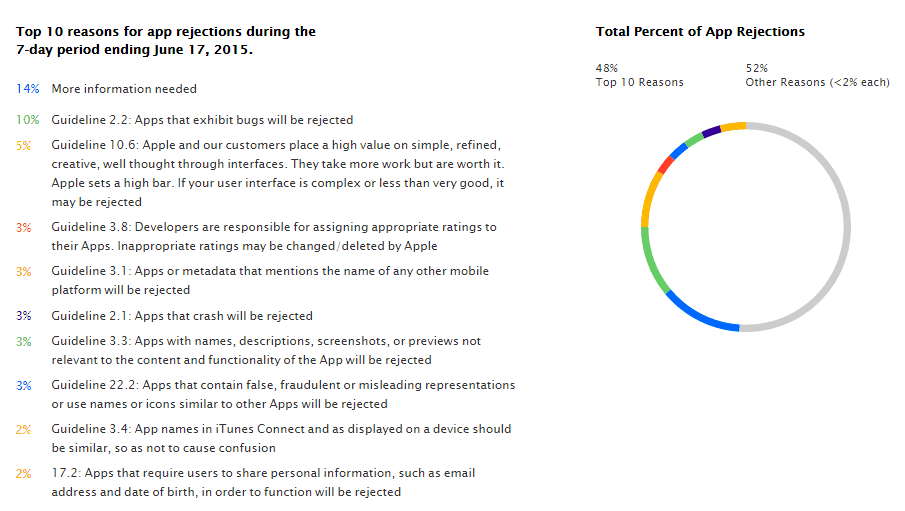 Time and again, Apple has very clearly asked app developers to be familiar with the technical, content, and design criteria before developing an app.

The best advice would be to fully read and understand the Apple’s Developer Guidelines and make sure that your app’s functionality doesn’t reside in any of the grey areas.

Creating a successful app and optimizing it for the App Store can help you avoid rejections. But, if you have an app that has received a thumbs down from Apple, don’t feel lost.

Here are 5 things you should do once your app is rejected by Apple.

Rejection of your app is a nightmare in a true sense. But, don’t panic because that won’t make things any better. What will make a difference is if you analyze the reason for rejection.

Apple sends you an email to notify the reasons for rejecting your app. The email typically looks like this:

After logging in > Click on My Apps > Select your rejected app from the list > Proceed to view the app listing page.

A red-highlighted message will appear towards the top of the listing which will look like this:

Clicking on ‘Resolution Center’ will give you a rejection code (such as 2.1, 2.2 etc.) with a short description.

In this case, the description read, ‘Apps that crash will be rejected’. But notice Apple gives you the details about your app which crashed with crash logs and sometimes with screenshots.

They also guide you towards the next step.

#2 If the reason is straight forward – fix it and resubmit

Your next step should be to fix the problem and resubmit your app in the App Store. Like in the above example, all the developer needed to do is to fix the crash issue and the app would be ready to go back up on the App Store.

Or, for instance, the reason for rejection of your app states: 3.5 Small and large App icons should be similar, so as to not cause confusion.

Now, this is no rocket science to understand and implement. Quickly rectify the small and large icons and resubmit your app.

If you understand the reason for the rejection, you can make the necessary changes in iTunes Connect or within the app itself, and then resubmit the app.

If you’re unclear on the reason for the rejection, read the next point.

Although Apple provides you with a specific reason for rejecting the app, there are chances you might not understand the context of that reason in terms of your app.

The reasons provided by Apple could at times be vague or broad and not very specific. In this case, when it’s unclear, start looking for help.

There are people out there who have faced similar issues and a lot of them have already documented the problem and responses. Do your research with the rejection reason and you’d come up with a host of problem/solution posts that would address your query.

You might feel that the rejection reason stated for your app was totally inappropriate, bizarre or wasn’t relevant. If you are confident about your app’s functionality, you can contest Apple’s decision of rejecting your app.

Due to the ability of the app to access a version of the ancient Indian text Kama Sutra, Apple considered the app to contain objectionable content.

However, the owner of the app, James Montgomerie did not agree with this rejection and continuously got in touch with Apple team, as explained in his extensive blog post. After several follow ups with Apple, he got his app approved and it went live on the App Store.

James wrote a follow-up blog post, where he said:

“Earlier today I received a phone call from an Apple representative. He was very complimentary about Eucalyptus. We talked about the confusion surrounding its App Store rejections, which I am happy to say is now fully resolved. He invited me to re-build and submit a version of Eucalyptus with no filters for immediate approval, and that full version is now available on the iPhone App Store.”

Here’s another example of Apple rectifying its decision of rejecting an app.

An app developer created a sync solution app, such as Dropbox. In this case, it’s understood that the user needs to sign in to access the features of such an app.

However, Apple rejected the app on the clause ‘17.2: Apps that require users to share personal information, such as email address and date of birth, in order to function will be rejected.’

The fellow developers suggested her to approach Apple and give a clarification on the functionality of the app. She did the same and her app got approved.

If you feel the same, get in touch with the Apple team and put your point across.

#5 If you are still confused, leverage communities

If you are still torn about your app’s rejection reason and all the above points don’t seem to help, leverage communities.

There are several active forums for app developers and entrepreneurs where you can get solution to your very specific app rejection issue from the members. The members of these communities are developers and entrepreneurs like you and the communities are built in such a way to help people who are seeking guidance or answers to their most pressing queries.

Here are a couple of communities you can post your queries at: