Recently, an independent study by MobileSlots discovered a list of what workers want. From a games room to Segway scooters, the top 50 cool office perks have been revealed in this study. Personal Baristas, daily buffets, a bakery, an ice cream van, chocolate fountains, popcorn machines and a bar that pops up at 5 pm – all made the list.

All this may sound fancy but the truth is, for creating a successful app or a business, its employees are its biggest asset. However, to attract the best talent, you need to go that extra mile and make sure their interests or daily life challenges are taken care of so your employees can just focus on work without having to worry about their problems.

Related: How to find a technical cofounder for your startup.

#1 Have employees using bikes to work?

Most people working in Facebook’s Menlo Park Headquarters were living within 5 miles (8 kilometers) of the Facebook campus and many of the roads are relatively bike-friendly for those who choose to ride their bike to the campus. So, Facebook created an interesting in-office bike storage to avoid employees chaining the bikes outside or in the garage.

Facebook has been working to promote bicycle use among their staff. A highly celebrated event at the Menlo Park campus is Bike to Work Day. 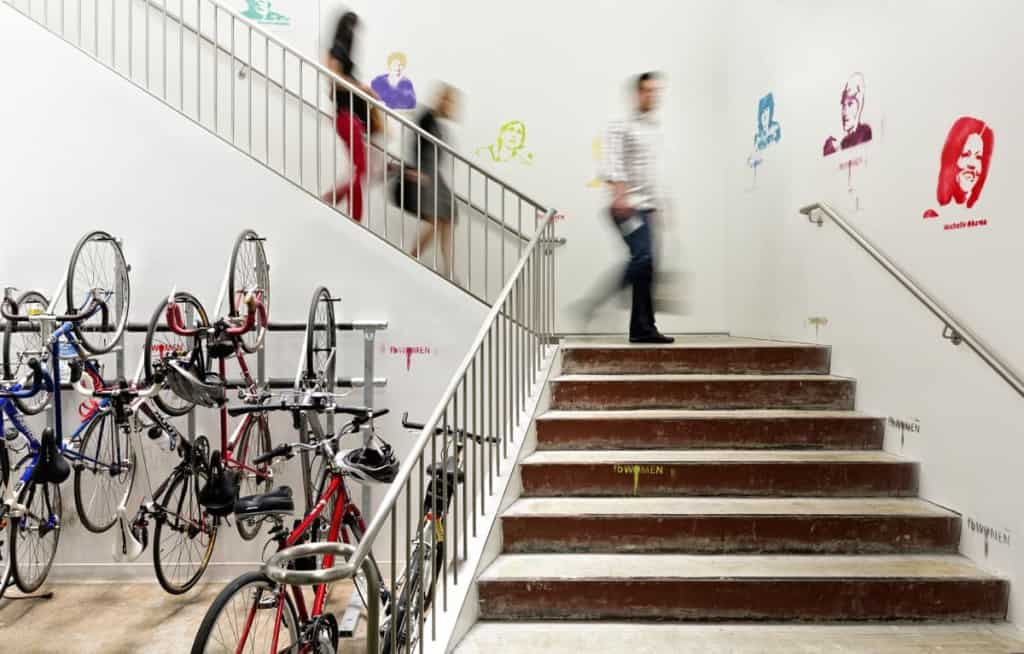 #2 Have employees who love pets?

But not everyone was keen on dogs due to allergies and hygiene issues as well as disruptive barking during all-important sales calls. After listening to feedback, Salesforce added a new spin on this growing trend. The company decided to create an independent, soundproof workspace for dog owners, with rubber flooring, where up to six employees can work while supervising their pets. The project is called ‘Puppyforce‘.

#3 Want to involve your employees in operational decisions?

When Shutterstock moved into its 85,000 square-foot headquarters in the Empire State Building, every interior decision was driven by the perspective of its employees. The company called on the collective brainpower of their staff to nominate and vote on the themes of their two game rooms (Alice in Wonderland and 8-Bit), conference rooms, design a secret library, and even select furniture and food choices.

They finally settled for Alice in Wonderland-themed game room.

#4 Don’t want your employees to starve?

The New York office of web giant, Google has no part of the office that is more than 150 feet from food—either a restaurant, a large cafeteria, or a micro-kitchen. the purpose was to encourage employees to snack constantly as they bump into co-workers from different teams within the company.

Related: What does it cost to develop an app.

#5 And also want to give them a treasure-trove of knowledge?

#6 Have employees who are passionate about music?

Venmo, the mobile payment company owned by eBay, realised that they have a lot of musicians in their team. So, the company built a music room where they can play their favourite instruments. The employees find the space so cool, that they hang out there even on weekends.

#7 Have employees who love reading?

Lyft has its employees’ favourite childhood stories hung on the walls. But if you push the painting, the wall gives way to a secret library.

At Dropbox, each new hire receives a helium-inflated Dropbox balloon (silver for interns, green for longer-term hires) indicating that they are new to the company. These balloons serve as conversation starters for other employees. There’s also a program called ‘Lunch Box’ that pairs employees with another random Dropbox employee so that you meet new people.

#9 Want to remove the unnecessary paperwork?

Trust your employees and cut the middle departments. Dropbox office has this vending machine stocked with every IT gadget an employee would need, accessible with their ID card.

#10 Want to give them the most comfortable work stations?

Your workstations are directly proportional to your productivity. AirBnB’s Dublin office has this interesting tiered seating.

Virgin Money’s Edinburgh operation centre has a sky painted on its ceiling. The theory is that staring up at the clouds is likely to have a beneficial effect on creativity.

At advertising agency Mother, every member of the agency sits at the same huge concrete desk that spreads throughout its space. This helps staff to talk to each other and removes hierarchies.

Kickstarter has a rooftop garden for employees to hang out. There are also composting and recycling facilities within the office premises.

#14 Here’s another way to go green

Booking.com’s Singapore office is doing its bit for the environment with its a contemporary garden in the sky.

#15 Have a huge office and employees are tired of walking?

Try scooters inside the office! Software company Box moved into a huge and modern new space in Los Altos. They also got scooters for their employees to move around in this cool new and huge space.

Peer 1 Hosting created a 17,000 square feet adult slide spanning through three levels of the office. The idea was to reach the clients or guests on the ground floor reception and waiting space ASAP.

Pinterest have a ‘Push It’ board! Whenever a launch is complete, it’s added to the board.

#18 Want employees to vent their frustration?

Ever felt so frustrated at work that you want to scream? Employees at advertising agency Wieden + Kennedy have a leather padded cell at their disposal. Here they can punch the walls, if they wish – or simply kick the bean bag around for a while to blow off some steam.

#19 Have employees who carry work to the loo?

When Eventbrite curated its new office it made several changes based on employees feedback. In a blog post, Eventbrite said, “Because we’ve all been stranded in the restroom with nowhere to stash our laptop and cell phone, we installed nifty electronics cubbies in the restrooms.”

What is the best office perk your company offers? Let us know in the comments section below.