TL;DR: You might learn awful coding techniques, pay a bomb, and can still go to jail for having a clone script.

If you type ‘How to clone an app’ on Google search, you will get a list of resources, tutorials, tools, blog posts, and even whitepapers for this illegal activity.

It is very easy to lift a clone script and that’s the reason everyday people are trying to clone the most popular apps. Take a look at this recent data from Priceonomics: 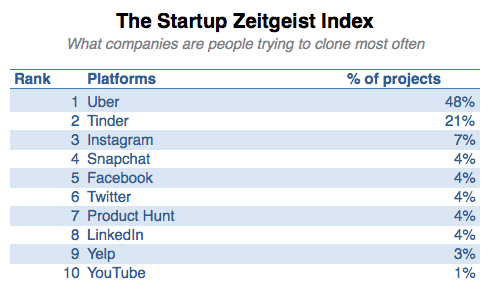 It’s not wrong to say, every successful app is followed by hordes of clones and the best argument for using a clone scripts is – ‘less cost, time, and skills.’

Well, you are right on all the points, except what comes after that.

While creating an app from a clone script might look like the easiest way to make money, it is not a very feasible option. And here’s why:

Not having a technical background for building a mobile app is perfectly okay, because in that case you conceptualize the app and look for technical co-founders.

But building an app on your own without or with limited technical knowledge can be negligence. Cloning an app is NOT as easy as it sounds.

If you look up the Internet for research on clone apps, you will find many people sharing their nightmares of having clone scripts in their apps. Here’s an excerpt from one of the Quora threads about using a clone script for Whatsapp:

“There are many opensource XMPP servers available freely like Openfire, firebase etc that you can use freely. However, these are costly to maintain unless you know some coding yourself. Hire a software development firm if you need a WhatsApp like chat application, pay them well and live your life :)”

Majority of the clone script market places have been reported for selling products that do not work, are full of bugs and do not have the features advertised.

Even the differences in design and functionality between platforms like Apple and Android can complicate the process.

The iOS app for Airbnb was built entirely in-house. But, they realised they don’t have the internal resources or experience to convert the same app to Android. So, they outsourced.

The development of the Android app, from start to finish, took around five months, even though most of the features and design elements from the iPhone app were replicated.

As stated by one of the project lead developers, Fred Melin, “Core challenge of building the Android app was preparing for the multiple screen sizes on Android devices.”

At the AppsWorld North America conference, Audrey Troutt, an iOS and Android developer at Artisan Mobile explained, “Don’t assume that because something works in your iOS app that it will work on the Android platform.”

If you still decide to build a direct clone just to save money, there’s a good chance you will end up doing this:

You might expect that creating a replica of an app which is already built would be less expensive than creating an entirely new one, but here’s the catch.

Copyright infringement law discourages smart, innovative people from using their talents to create things that the rest of society can use and enjoy.

Not so long ago, in 2014, four alleged members of android mobile device app piracy group were charged guilty. It was the first case of its kind by the US Department of Justice.

The group was found guilty for illegally distributing counterfeit mobile apps involving $700,000-worth (£425,000) of downloads.

In an interview following this case, US attorney Sally Yates, said, “Theft is theft — whether the property taken is intellectual or tangible — and we will continue to prosecute those who steal copyrighted material.”

And just for your knowledge, the maximum prison sentence for the charge of conspiracy to commit criminal copyright infringement is five years in prison.

In another case of copyright infringement, a company ended up paying $4,000 for a digital photo that retails for about $10. They grabbed a photo from the web and used it for a client’s blog. Just few months later, they received a cease and desist demand notice from a lawyer and an offer to settle the claims for $4,000.

Apparently, copyright infringement involving images that are registered with the U.S. Copyright Office allows for statutory damages of up to $30,000, or $150,000. So, the company chose to settle the claims for $4,000. They learnt an expensive lesson on copyright laws from an innocent mistake.

Usually, names and non-functional elements fall under copyright law, however if the creators of the original app spotted any similarities in the patent work, they might sue the creators of cloned app.

The compensation or the lawsuit settlement formalities might vary, but in any case, it will definitely be more than that cost of the clone script.

#3 Clone script apps are fast. Yes, because they exit in a flash!

Apple iOS and Android, that dominate the smartphone market, owning over 90% of the market share, don’t endorse apps with clone scripts.

Apple and Google have been making news for taking action against app cloning.

For example, when Flappy Birds mania was at its height, both companies took action against new app submissions had any resemblance with the game’s template.

In fact, each of the app stores have their own process and place to submit clone-related requests. You can use the following links to report apps infringement issues in different app stores:

Some of you must have done your research and you would argue, ‘Clones could be easily exempted,’ which is true. But the industry is putting continuous efforts to stop piracy and save the hard work of genuine developers.

Industry experts are suggesting every game (every app, in fact) should have a ‘report clone’ button on its App Store entry.

There is no assurance that your clone script will be rejected from the app store immediately. It might sit there for a while but if anyone spots it, Apple and Google will do their part.

A custom-developed script is not only original but comes with added advantages such as better customization, security, and support. On the other side, clone scripts always look like an easier option to make some quick bucks. But don’t assume that cloning an app is as easy as ‘copy and paste.’ Anyone who knows the nuances of app business will never recommend you using a clone script for your app.